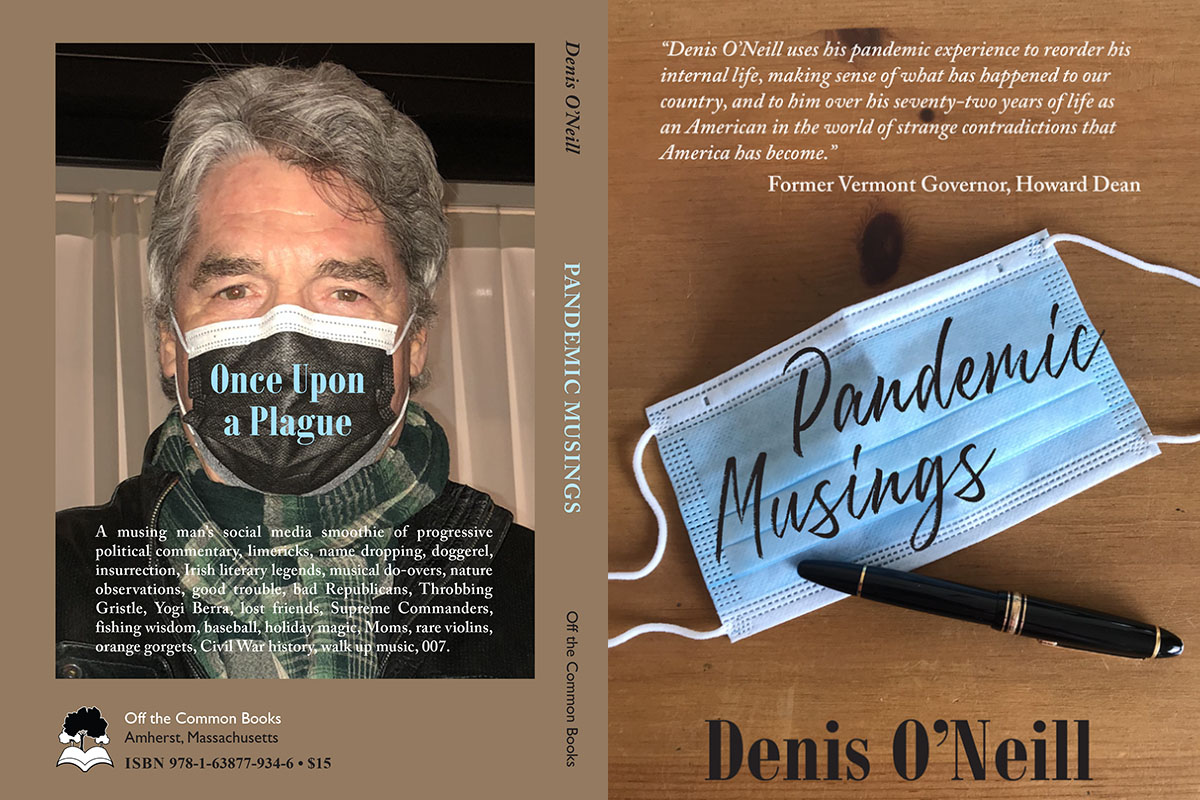 Once Upon a Plague

For a writer, global confrontation with coronavirus became a perfect science experiment. The reign of Donald Trump as our nation’s most rancid president was in its final year, unleashing all of the catastrophic forces that linger and fester in America today. Confinement intended to blunt the spread of the virus led to greater observation of the world around us – politics, nature, history, science, literature – as well as to enforced stretches of contemplation. Isolation, masking when in public, and the mounting national death toll made us miss friends and family all the more, and remember even more wistfully those who had already left us. Emotions of anger, dismay, resignation, and hope were bi-products of the experiment. They fueled all of the dispatches gathered here as a collection of Pandemic Musings, posted initially on Facebook, between January 2020, and July 2021.

Writing in a more abbreviated form than my normal screenwriting and novel pursuits proved liberating. In a way, it was a return to the kinds of writing I was exposed to as a boy and young man that made me want to become a writer. I grew up reading the commentary of humorists Art Buchwald and Russell Baker, and the outdoor columns of Nelson Bryant in the New York Times.

John McPhee, writing in The New Yorker, was always good for insightful, longer pieces on subjects as far-flung as birch bark canoes, Alaska, and geology. Ring Lardner, the masterful writer of loopy, short stories, amused me with the power of offbeat characters and quirky circumstances. The title of one of his books, “Shut up, he explained” remains, for me, the Holy Grail of book titles.

One of the unexpected upsides of COVID was circling back on writers I always meant to read. Brendan Behan had long been on that list. A serious alcoholic, and an active member of the IRA, Behan’s stories, tumbling in and out of pubs and prison – often punctuated by song – seemed both messy and miraculous. His “Confessions of an Irish Rebel” was the dusty paperback I inherited from my father’s library. Reviewer Kenneth Tynan (a theatre critic and a wonderful writer) praised the work in a sentence I wish I had written, describing an attitude I attempted to bring to this collection of musings: “Behan sends language out on a swaggering spree, ribald, flushed, and spoiling for a fight.”

The ebb and flow of democracy and fascism makes for eternal dance partners, battling throughout history to see who will lead. The rise of the Nazi Party in Germany is the historic backdrop to the Rodgers & Hammerstein musical The Sound of Music, from which the melody for “Some of Republican Things” is borrowed.

Singer, guitarist, David Philp – with his 1978 punk single, “When the Tanks Roll Over Poland, Again” (The #1 punk song in England when it was released) – has his own artistic connective tissue to authoritarian aggression.

I was a friend of Richard Rodgers’ daughter, Mary, and Mary’s son, Tod Beatty. My parents both fought the Nazis in Paris toward the end of WW II, as members of the OSS. My father was a Civil War historian and Lincoln scholar. James Andrews, the hero of his Civil War saga, Wild Train, gave his life at the end of a Confederate noose trying to preserve the union.

The battle for our own American democratic republic rages today. Make no mistake it is a second civil war, without the fixed bayonets, so far, although flag poles and hockey sticks were wielded on the Capitol steps on Jan.6.

Even as the January 6 Commission uncovers new acts of lawlessness and sedition by Republicans, Some of Republican Things (policies and priorities), presented in this song satire, are already known. It is no time to be on the sidelines. Silence, Dr. King warned us, is the equivalent of consent. 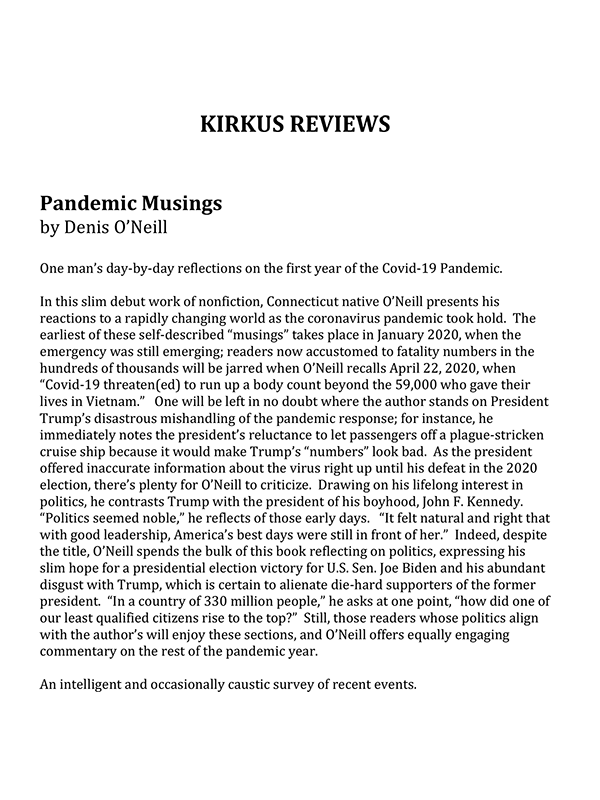 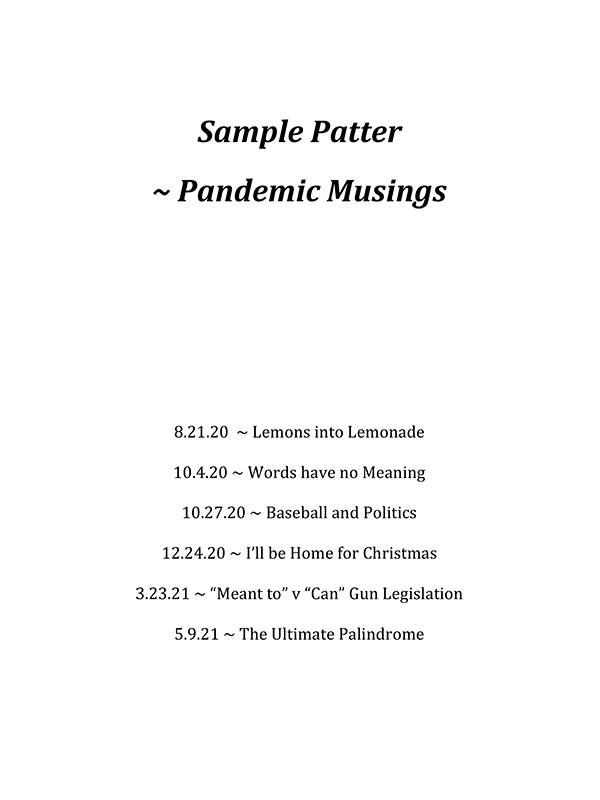 Where to Get the Book

Get it On Amazon

A Note from the author: In 1776, Thomas Paine’s book Common Sense was published to urge colonial America to break free of the English monarchy and establish a republican democracy. In 2021, with the publication of Pandemic Musings, I am, in my own small way, urging Americans to use their common sense to thwart the treasonous, would-be authoritarian efforts of disgraced former President Donald Trump and his Republican cult following. The goal: to maintain the republican democracy Thomas Paine helped inspire nearly two-and-half centuries ago.

“A smart, insightful, carefully articulated book – and often witty, to boot! Your political comments are trenchant, but I found myself particularly drawn to your excursions into personal history: getting the news of the draft lottery while playing a college hockey game; ominous wisdom from your Mom; A Stradivarius concert in your living room at Christmas! Our pandemic year has been a disaster, but spending it with your comments offers a lonely bright spot.”

“Your Pandemic musings arrived today and I’m really enjoying it. You have managed to say exactly what I have been thinking about such things as our former president, climate change, politics, who we are or could be, etc., except you say it better.”

“I have just finished reading your latest, Pandemic Musings with great pleasure. You absolutely nail the Donald, best writing on him I’ve read. Plus, wonderful little case studies like the one on politics and baseball. Well done.”

“Denis, the book is delectable. My only complaint is that somehow many pages are dog-eared. I ordered another copy for a writer friend will enjoy the Irish lilt.”

“I have followed the Trumps for years. Truly vermin. Your book is delightful.”